Metal & Magic First off, let me state that I don't get a dime for this (or any other compensation) and never will.  When I make a recommendation it's because it's something I found worth recommending.  This is an absolute must-check-out!  There are books and lots of original artwork. 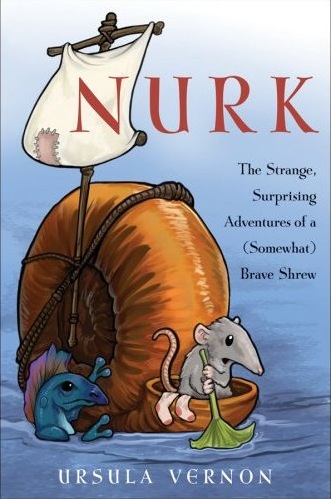 Two special recommendations for purchase... the first is here.  You can also check out this at Amazon.  Get a copy of Digger or Nurk for yourself and one as a gift for someone else who enjoys fantasy stories and art.  When S.Weasel gets around to putting a book together (hint, hint) they will go well together.

This is also going in the sidebar... it's that good.  One for Uncle Badger and S.Weasel below the fold.
more...

3 I think so too... You should compile your stuff too.  You had me at "Wanna Rassle?"  The gleam in the eye is just like my wife's when I've done something exceptionally stupid (I'm lucky if I don't get "the look" more than once a day.)

Free Ebooks This was big a couple of months ago when Cox & Forkum made four of their political cartoon books available for download... free of charge.  Wowio has no subscriptions, no fees, and no hassles after over two months of use... so I feel very comfortable recommending that you check them out.  If you have any interest in reading, they have something you'll like.

Three titles a day, thirty a month, and don't forget to click the little smiley-face to say thank you.  Enjoy!!

I think I first saw this at The Jawa Report so I'll give them the h/t, but it was in several other places too.  Get the Cox & Forkum books at least, they're outstanding.

1 Well, if it's free books you want, try the Online Books Page
http://onlinebooks.library.upenn.edu/

And very glad to see you back.

Best.Rendition.Ever This is great and well worth your time.

h/t to JAFKIAC via Ace of Spades

Chavez Needs To Be Gone I said in a comment over at Ace's that Chavez was buddy-buddy with FARC:

18 Chavez is aligned with FARC and wants them to overthrow the Colombian government.  That way, he has an ally (puppet) close by and would have taken the first step towards his anti-US, South American Union.  He's pissed because one of his biggest allies was killed and it has set back his plans.

Why do you think he was able to negotiate those hostage-releases?  His winning personality?

This was before the news about the intelligence found on FARC computers.

Evidence found in computers seized in a raid over the weekend suggests Venezuelan President Hugo Chavez recently gave the leftist Revolutionary Armed Forces of Colombia $300 million, Colombia's national police chief said Monday.
Chavez is a thug who... like the old Soviet Union, the Palistinians, and the Iranians, wants to blame the United States for all the world's problems.  We get between 7% and 10% of our oil from Venezuela and Chavez has threatened to stop selling to us.  What most of the MSM is failing to tell anyone about this story is that Venezuela's oil can only be refined in the United States because it is such a poor grade.  If he doesn't sell his oil to us, he doesn't sell his oil.

Maybe a month or two of reduced supply would be worth it to get rid of this tinpot dictator because his economy is only being supported by the inflated price of oil right now.  Without that income from us, it won't be long before the people of Venezuela (and it's military) take care of this problem for the entire world.

1 I'm intrigued by how George Bush will respond to the escalating problems in South America.  First, I can't imagine any Democrat would agree to a military intervention, even if he wanted one.  Second, in modern times, the US has opted for covert interventions in the Americas in order to prove we have no territorial designs on our neighbors.

Nevertheless, I assume the US has a significant contingent of Special Operations personnel and equipment already in Columbia with more available on short notice, and I bet the satellites are busy overhead. My guess is the Bush Administration will officially keep its distance and encourage the parties to resolve their differences, while unofficially doing as much as possible to help Colombia and hurt Chavez.

That's probably a safe assumption.  I would be very surprised at any attempt to deploy regular troops since the Dems would have a field day.  It's sad that the political considerations carry so much weight.  I wouldn't be shocked at seeing Chavez cut off economically just to see how much support he'd get from Ecuador and Iran.  I don't think the Saudi government would give him any overt support as they want to continue the pretense of being allies.

3 Why would the Saudis want to help Chavez?

It is to their political and economic advantage to draw our attention in as many different directions as possible.  The Saudi government is not our friend, although I wouldn't say the same about Saudis in general.  Same with Iran and Venezuela actually.

5 I realize the Saudis are not our friends but following the adage of "The enemy of my enemy is my friend" then the Saudis should be happy to see America pitted against Chavez and his friends, the Iranians.

Which is why they won't support him overtly.  They have been supporting him covertly for quite a while, for just that reason... to make him a large enough problem that it draws our attention.

7 I see.  Does that mean you are a George H.W. Bush/James Baker-type realist when it comes to foreign policy?  On the surface, they seemed to know how to play the Saudis.  (I qualify that because it's hard to know who's playing who in the Middle East.)

Actually, I think they're a little blind to Saudi machinations because of their personal ties.  You don't want to believe bad things about people you like, and the Saudis can be very personable as individuals.  I think we've just been relatively fortunate that the Saudis want to appear our ally instead of overtly opposing us.  They don't like us, our way of government, our laws, or our way of life.  Radical Islam began with them and will end with them.  Once they decide to overtly seek a global caliphate, Iran will be their best friend.

In the Middle East the Saudis run the show (with rambunctious children as part of the act, so things don't always go exactly as they wish.)  Like parents however, they set the direction of the family and make the final decisions, backed by the family wealth.  The other problem countries in the ME are symptoms of the real problem originating in SA... Radical Islam.

Would I do anything different with the Saudis?  I don't honestly know enough to say.  I would need a lot more information before considering any changes.

Contrary to the public's common belief, all drugs are dangerous. Just because a drug is approved by the US Food and Drug Administration (FDA) does not mean that it won't cause problems; all usually do, from minor side effects to permanent disability, to life threats, and even death.
Unless you talk to a trial-lawyer of course.  Then, the evil drug companies intentionally release dangerous chemicals disguised as medication just to watch the pain and suffering as they chuckle maniacally.

Wireless Amber Alerts Child abductions are seriously scary.  You have almost certainly heard of Amber Alerts and may have even seen the overhead signs on highways that broadcast them.  What many people have never heard of is that you can get text messages of Amber Alerts in your area.  The service itself is free here, but you do have to pay any applicable text message fees through your carrier.  I've been signed up for these almost since they began.  It's a great service and not very intrusive since you only get alerts from your own specified area.  I seem to get an average of one or two each month, along with updates and when they are canceled... about 5-6 texts a month.

I don't have a financial interest here or personal history dealing with Amber Alerts.  I just think it's a great service and urge you to check it out.  Also, I just got one on my phone which is what brought it to mind.

Or Donate With PayPal

I will not submit

Other Side of Kim
kishnevi

Sites are added to the Moronosphere and Gerbil Nation blogrolls by request. I got everyone on there who was there when they were made, so email me if you know of a new addition. Some of these are on the main blogroll as well and will remain duplicated.

The main blogroll is at my own discretion. I gratefully accept suggestions by email, but I don't do blogroll exchanges. If a site is there, it's because I personally recommend it. If it's one that is not updated often, check out the archives and you'll probably see why it's there. I will rarely remove a site from the main blogroll once it's there.

Not a sponsored ad!

Thanks to S.Weasel!
She did most of the
graphics here

Comments are not moderated and users are not registered. This means that I have little to no control over who posts a comment or the content of that comment. Therefore, comments other than my own do not reflect any viewpoint of mine, no matter how long it appears as I will likely remove comments that cross the line of decency. If a comment is removed, a notation that the comment was there will be inserted. Any questions or concerns about posts, comments, copyright, or other issues may be addressed by emailing me at "stashiu3 AT gmail DOT com" replacing the AT with @ and DOT with a period. If that's too complicated, maybe you shouldn't be on the internet without supervision. Just sayin'

I am a Psychiatric Nurse who retired from the Army after 24 years total service. I started out as a Private E-1, made Sergeant E-5 in 23 months, then went to nursing school and ROTC to get commissioned. I am interested in politics where I lean heavily conservative, movies, music, and books. Hopefully you will enjoy what you see and come back often.